Updated July 19 at 3 p.m. — U.S. Vice President Mike Pence defended President Donald Trump’s record as “18 months of action, 18 months of results, 18 months of promises kept,’’ as he exhorted St. Louis area supporters to get out to vote in November.

In particular, Pence called for help in defeating U.S. Sen. Claire McCaskill, a Missouri Democrat who the vice president contended is too liberal for the state — and the country.

“While she claims to be a moderate, she votes like Bernie,’’ Pence said, referring to Sen. Bernie Sanders, an independent from Vermont.

Pence was speaking at an event Thursday at the downtown Marriott organized by America First Policies, a nonprofit set up shortly after Trump’s inauguration to promote his policies. The group is a 501C4, so it does not have to identify its donors or how it spends its money.

Pence’s remarks were similar to those he delivered last week at an America First Policies event in Kansas City.

A panel of local businesspeople took to the stage before Pence made his remarks to tout the benefits of the tax cuts approved by Congress last year — but which continue to get a mixed reception in public polls.

Ray McCarty, president of the Associated Industries of Missouri, attended the St. Louis event, as well as Pence's Kansas City visit.  McCarty said it was important to highlight "what the impact of the tax cuts have made." 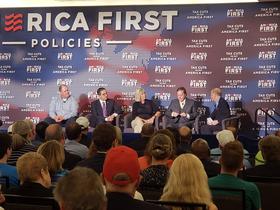 "This is a lot of the Republican base,'' Howard said, pointing to the crowd. "Let's get them fired up."

Howard added that the policy reason for the vice president's visit was equally important: "The president has done a lot of things that are helping the economy and he's not getting credit for that."

Pence contended that Trump’s domestic record was far stronger than that of former President Barack Obama, who Pence said produced higher taxes and “the nightmare of Obamacare.”

Pence also defended  Trump's actions regarding Russia, which have come under attack after the president's news conference Monday with Russian President Vladimir Putin. Trump appeared to side with Putin and disagree with the U. S. intelligence community's assessment that Russia tried to influence the U.S. presidential election in 2016. Trump revised his comments later.

Said Pence: “We accept our intelligence agencies’ conclusions about the 2016 election. But after years of the failed reset of the last administration and capitulation to Russia, under President Trump we’ve met Russian aggression with American strength.”

Still,  the St. Louis audience saved their strongest applause for Pence's declaration that a border wall with Mexico will be completed, and his pledge that the administration will keep in place the nation's Immigration and Customs Enforcement agents, also known as ICE.

Near the end of his 30-minute address, Pence was briefly interrupted by an audience member — Debbie Igielnik — who shouted her opposition to ICE and the Trump administration’s now-defunct policy of separating immigrant children from their parents at the nation’s southern border.

Igielnik then displayed her T-shirt which declared “It’s Mueller Time” — a reference to the independent counsel Robert Mueller, who is investigating whether the Russian government had inappropriate influence in the 2016 election.

Several hours before Pence arrived, protesters had gathered across the street from the hotel. Many of the signs focused on their support of reproductive rights and protecting health care coverage. Most had left by the time his motorcade appeared.

Pence also is headlining private money-raising events for Hawley and U.S. Rep. Mike Bost of Illinois before heading back to Washington.