Didn't Get Your Flu Shot? Department of Health And Senior Services Says It's Not Too Late

The 2017-2018 flu season is estimated to be at its peak, and the Missouri Department of Health and Senior Services (DHSS) says it’s still a good time to get vaccinated.

Director of the DHSS, Dr. Randall Williams says although the vaccine’s overall effectiveness is less than those of past years for adults, people who received the vaccine, and also contracted the flu, had less severe symptoms, required less hospitalization, and recovered faster.

“We predicted back on Oct. 10 that we thought this was going to be a particularly tough season because of what was going on in the Southern Hemisphere, where they see the flu before we do," says Dr. Williams. "You can imagine that we would just be incredibly sad, knowing what we know, if somebody was to die from the flu four weeks from now because they thought they didn't need to get a flu shot.”

Dr. Williams says they’ve observed this strain of virus to hit young people the hardest of any demographic, and children will benefit from the vaccine the most. The Center for Disease Control (CDC) reported that the flu vaccine effectiveness this year is higher specifically for children by an estimated 59%.

Going into the season’s sixth week, 1,077 pneumonia- and influenza-related deaths have been reported in the state so far, and although the DHSS predicts this flu season will only continue for another five weeks, they have seen it peak all the way through March.

Those who are elderly or immunocompromised may benefit from wearing a face mask when going out in public. Simple hygiene practices, such as washing your hands and not going to work upon being symptomatic, will also lessen the spread of disease. The DHSS says they now know that just breathing spreads the flu.

“We’ve always emphasized what’s called fomites, which is doorknobs and stairwells, touching them. But now, we’ve learned that just breathing, without even sneezing or coughing, can put droplets out in the air,” says Dr. Williams .”So, I think it’s important that if you feel yourself coming down with the flu, the moment you feel that way, try to remove yourself from infecting other people.

But, he says the best way to defend yourself against the virus is to get vaccinated. To get vaccinated at a location near you, visit: http://health.mo.gov/living/healthcondiseases/communicable/influenza/. 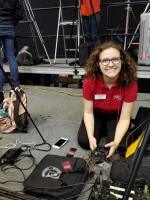