'Hands Up, Go Vote' Activists Take Their Cause To The Polls

Chants that have become synonymous with protest and Ferguson were altered at a  rally Monday night, where voting took center stage.

The crowd of nearly 75 at Greater St. Mark Family Church in Ferguson, chanted  “Hands Up, Let's Vote” and “We young … we strong … we gonna to vote all day long.”

The rally, organized by the National Action Network, focused on mobilizing the black community for this year’s midterm election.

Politics surrounding Ferguson could influence this race. A group of African-American elected officials have endorsed Stream because of unrest in Ferguson, and frustration with the Democratic Party in St. Louis County. Some activist are supporting write-in candidate ZakiBaruti for St. Louis county executive. He is a member of the Michael Brown Leadership Coalition and president-general of the Universal African People's Organization.

Bob McCulloch, the St. Louis County prosecuting attorney, who is overseeing the grand jury process in the Darren Wilson case, is also up for re-election, however he is running unopposed.

For more about the election, go to "Cheat Sheet: A Quick Guide To Candidates And Issues."

Although  this year's election may have a minimal direct impact in Ferguson, Michael Brown’s family attorney Anthony Gray says this election is about showing power in numbers.

“Our voter turnout percentage is historically very low for midterm elections. If we come out in mass numbers and vote, even if we don’t get anything from it, we would have changed the statistical dynamics of voting and all of that will be attributed to Mike Brown Jr.,” he said.  “That will be his legacy.”

Benjamin Crump, who is also an attorney for the Michael Brown's family,  noted out that the shooting death of Brown has highlighted the importance engaging politically.

Beyond rallying for political engagement in this year’s midterm, Crump also pushed for support of national legislation, calling on those gathered to support the Michael Brown Law.

“We have to have a legacy go out in the history books,” Crump said. “In the annals of time that Michael Brown did exist. That Michael Browns’ life did matter. That Ferguson stood up as an example, not just for America but all the world, when a child was executed in broad daylight. That they would not look away and that we would make the world respect Michael Brown. Now the way we do that is by voting, so we will get the Michael Brown law passed not only in Ferguson and St. Louis, but all over America.”

The Michael Brown Law would require state, county, and local police officers to each wear a camera. An online petition for the law has received more than 150,000 signatures. The White House responded to the petition, noting their support of the use of cameras by law enforcement, but also their concerns about cost and privacy.

Officials have estimated that Tuesday's voter turnout will be lower than it was for 2010 elections. Organizers of Monday night’s rally hope to prove them wrong. 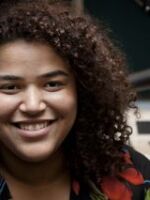 Emanuele Berry
Emanuele Berry is a 2012 graduate of Michigan State University. Prior to coming to St. Louis she worked as a talk show producer at WKAR Public Radio in Michigan. Emanuele also interned at National Public Radio, where she worked at the Arts and Information Desk. Her work has been recognized by the Michigan Association of Broadcasters, the Society of Professional Journalists, the Radio Television Digital News Association and the Hearst Journalism Awards Program. Berry worked with St. Louis Public Radio from 2014 to 2015.
See stories by Emanuele Berry