Volunteers work against time to save artifacts from Goldenrod Showboat

Volunteers have worked countless hours salvaging artifacts from the century-old Goldenrod Showboat that was once a fixture on the St. Louis riverfront, says Jake Medford, vice president of the nonprofit Historic Riverboat Preservation Association that’s been working to restore the vessel.

Crews have removed the grand light fixtures, mirrors and stained glass from the interior of the vessel and have until April 1 to complete their work, he said. The showboat will then be turned over to the owners of the dock on the Illinois River, near Kampsville, Ill., where it's been moored for several years.

“From there out, they will be in control of the vessel, and I’m not for sure what they’re going to do, but I do know that ultimately it will be scrapped -- what’s left of it, at least,’’ Medford said.

The group is putting the artifacts into storage, while they work on a plan to lend them temporarily to museums in the St. Louis area, he said.

The Goldenrod suffered severe structural damage last summer when it was moved onto land to protect it from the flooding river. But the hull of the vessel buckled because the ground was uneven. The group decided that repairs would be too costly and began focusing on preserving what they could.

“We weren’t able to save all of it, but we are able to save some of it,” Medford said. “It’s sad to see it go, but knowing that we’re going to save part of it is all worth it.”

The group hopes to eventually create a museum in St. Louis that would celebrate the city’s river history. 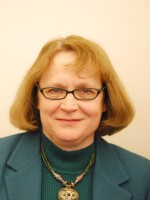 Mary Delach Leonard
Mary Delach Leonard is a veteran journalist who joined the St. Louis Beacon staff in April 2008 after a 17-year career at the St. Louis Post-Dispatch, where she was a reporter and an editor in the features section. Her work has been cited for awards by the Missouri Associated Press Managing Editors, the Missouri Press Association and the Illinois Press Association. In 2010, the Bar Association of Metropolitan St. Louis honored her with a Spirit of Justice Award in recognition of her work on the housing crisis. Leonard began her newspaper career at the Belleville News-Democrat after earning a degree in mass communications from Southern Illinois University-Edwardsville, where she now serves as an adjunct faculty member. She is partial to pomeranians and Cardinals.
See stories by Mary Delach Leonard
Related Content