This summer, we're celebrating the things we're really into, besides, of course, daily news. Well, Emma Choi hosts NPR's Everyone And Their Mom podcast. It's a spinoff from Wait, Wait... Don't Tell Me! And so she wrote scorekeeper Bill Kurtis into helping her tell the story of what she's really into - Old Bay seasoning.

EMMA CHOI, BYLINE: There are things that I always keep on my person - my phone because duh, a tote bag because it's easy to wash when I spill my chai all over it, my various cards - the important ones like my credit card, driver's license, school ID and my frozen yogurt rewards punch card - and a compact, individual-sized container of Old Bay seasoning. Now, you might be asking...

CHOI: Oh, wow. Thank you so much. There's no secret. It's just good genes and Shiseido free samples my grandmother sends me. But in regards to the Old Bay, my reasoning mostly hinges on functionality. I eat nearly every meal in a college dining hall where the food can be best described as demoralizing. A sprinkle of Old Bay can elevate anything from a dry chicken breast to a nondescript featured fish to even, if the pickings are especially bad, a hard-boiled egg.

And of course, the transformative power of Old Bay isn't limited to just the confines of college cuisine. Bland food runs wild like a plague amongst this earth. Carrying a shaker of Old Bay, I'm like Achilles armed with his mighty shield...

CHOI: ...Running into an epic battle against unseasoned food.

CHOI: And beyond just its culinary uses, a container of Old Bay is a conversation piece.

KURTIS: Oh, hey, what's that in your bag?

KURTIS: Wow. That's so cool. Will you be my friend? Also, here's all the money in my wallet.

CHOI: Old Bay transforms a tasteless foodstuff into a mediocre meal. You could say that it's my spoonful of sugar. But instead of that magical syrup Julie Andrews doles out "Mary Poppins," it's orange, grainy and really high in sodium.

JULIE ANDREWS: (As Mary Poppins, singing) ...In a most delightful way.

CHOI: But aside from functionality, I guess I keep Old Bay with me because it reminds me of home. I remember eating a bucket of fries smothered in Old Bay while digging a giant hole in the middle of Bethany Beach, Del., not far from where the spice blend was created. I remember the scent of seafood when my family hosted blue crab boils - the searing pain when the Old Bay coating the shells got into the cuts of my skin.

At 22, my childhood feels both like something still close enough to touch and something that's seldom possibly far away. When I think of home, I think of hardwood floors, the sound of boiling jjigae (ph), of sunlight falling through a picture window. I think of our pantry stacked high with snacks, packets of dried seaweed and its tall rack of spices. It's nice to have a little bit of our pantry at the bottom of my bag.

CHANG: That is NPR's Emma Choi on her love of Old Bay seasoning. Transcript provided by NPR, Copyright NPR. 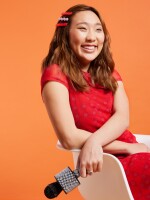 Emma Eun-joo Choi
Emma Eun-joo Choi is a comic, writer, "journalist" and host of the weekly short-form comedy podcast Everyone & Their Mom, a show where each week anyone including comedians, Marvin Gaye impersonators, or your parents could stop by and talk about the news.