President Donald Trump will portray the newly reopened steel plant in Granite City as evidence of the benefits of his trade tariffs during Thursday’s visit to the region.

Aides told reporters during a conference call today that Trump will defend his tariffs during his afternoon speech at a warehouse on the grounds of Granite City Works.

The plant workers are among the 500 people invited to hear the president.

Aides said the president is aware that some other factories – such as the Mid Continent Nail Corporation in Poplar Bluff – have been hurt by the tariffs. Mid Continent is among the nation’s largest producer of nails, and expects to lay off hundreds of workers. 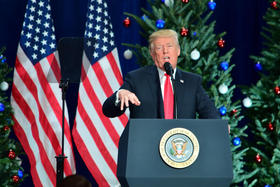 Trump believes that the nation’s workforce affected by the tariffs now — even if they lose their jobs — will benefit in the long term,  aides said.

Farmers in Illinois and Missouri also are being hurt by the drop in trade – particularly involving soybeans and grains – with other countries affected by the tariffs. The president has announced plans to dole out $12 billion in aid to affected farmers.

Trump is scheduled to arrive Thursday afternoon at St. Louis Lambert International Airport, where he will be greeted by Missouri Gov. Mike Parson and Lt. Gov. Mike Kehoe, both of whom held different offices the last time Trump stopped in the St. Louis region.

U.S. Rep. Mike Bost, a Republican from Murphysboro, Illinois, also will meet the president. Bost’s 12th district includes Granite City – and could be pivotal in determining which party controls the U.S. House next year. 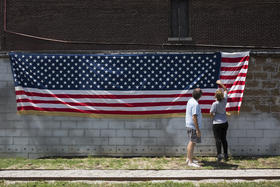 Bost is in a combative contest with Democrat Brendan Kelly, who has been endorsed by the steelworkers union.

Trump’s visit will mark the second time this week he has stepped on Missouri soil; he addressed a national VFW conference Tuesday in Kansas City.

A Trump spokesman indicated that the president wasn't doing any political money-raising during Thursday's visit here.