Sanders highlights hope that Missouri will be another Michigan

Democratic presidential candidate Bernie Sanders is banking on Missouri primary backers to provide the campaign boost that he got last week by a surprise victory in Michigan.

“I think we’re going to win a lot of states on Tuesday,’’ Sanders declared Sunday, touching off deafening cheers from the crowd packing the Affton High School gym.

Sanders made it clear that he’s optimistic Missouri will be among them. His campaign was conducting phone banks over the weekend in St. Louis and Columbia, Mo., featuring actor Justin Bartha, and Sanders will headline an election-eve rally Monday night at the St. Charles Family Arena.

His aim is to best Democratic rival Hillary Clinton, once the presumptive nominee who’s been “feeling the Bern” from Sanders’ appeal among certain segments of voters. At last count, Sanders said, he has won nine state primaries or caucuses. He's feeling the most pumped about last week's Michigan victory, which his campaign hopes will be an entree into other Midwestern states.

Clinton, who was in Affton on Saturday, is sending in her daughter, Chelsea Clinton, for a flurry of Missouri campaign events on Monday. The candidate's husband, Bill Clinton, barnstormed the state last week.

Chelsea Clinton’s events appear aimed at wooing the same type of voters that filled the gym for Sanders Sunday: overwhelmingly young and white.

Sanders’ stump speech makes a point of reaching out to all ages and all ethnicities. Still, it’s clear that his appeal is particularly strong among those of college-age, many of whom embrace his promise of tuition-free education at public universities and colleges. (To find audio of the entire Sanders speech, click this link.)

Free college and other issues

"Other countries have free college. We need to have free college," said Affton High School Student Council President Joshua Bohell, among the speakers warming up for the crowd before the candidate appeared.

The crowd cheered its agreement when Sanders also declared, “We have a broken criminal justice system. We are going to end institutional racism.”

While emphasizing that he believed most law enforcement officers were honest and hard-working, Sanders added, “If a police officer breaks the law, that officer should be held accountable.”

Sanders also blasted “cowardly Republican governors’’ and what he said were their attempts to “suppress the vote’’ by various measures. Although he wasn’t specific, Sanders appeared to be referring, in part, to photo-ID mandates that Democrats say hurt the poor, the elderly and college students — all of whom are less likely to have driver's licenses, the most common form of government-issued ID that some states allow to be used to prove identification at the polls. 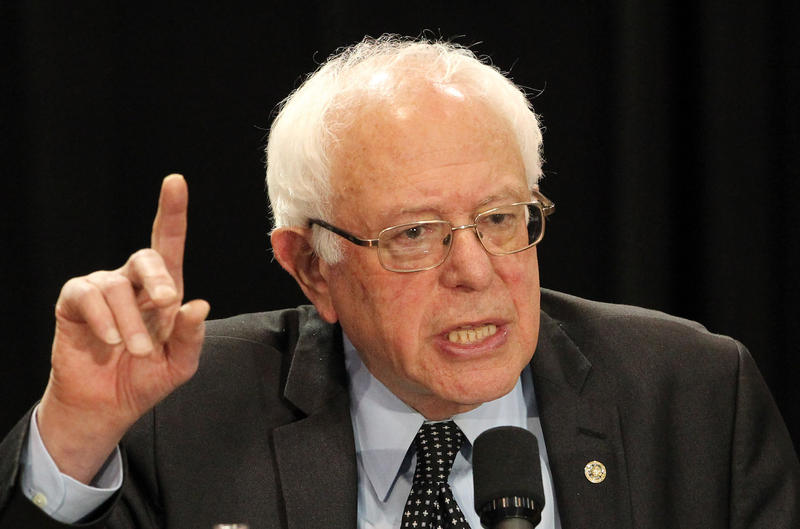 Sanders’ criticisms of Clinton centered on her campaign-finance operations, which include several Superpacs that can receive donations of any size, her mixed voting record on trade deals and her vote in late 2002 in favor of using military force against Iraq.

Clinton has said she regrets the Iraq vote, but Sanders implied that she shared responsibility for that country’s continued turmoil, even though most U.S. troops have left.

Although Clinton recently came out against proposed Trans-Pacific Partnership trade deal, Sanders implied that she was doing so for political reasons. His campaign has highlighted the North American Free Trade Agreement, known as NAFTA, that was put in place during Bill Clinton's tenure. Critics blame NAFTA for the defection of American jobs to Mexico.

Sanders' economic message when it comes to trade and income equality was one of the draws for Tom Madden, a union plumber from St. Louis, who showed up to listen to the candidate. "Income inequality is what's wrong with this country,'' said Madden, who asserted that too many Americans are victims of "the race to the bottom'' that some blame on trade deals.

His rally also featured two area Democratic state legislators — Clem Smith of Velda Village Hills and Genise Montecillo of south St. Louis County — who were backing Sanders. Montecillo told the crowd, "We cannot afford to loose another generation of voters, and this is why I endorse Bernie Sanders."

In any case, Sanders saved some his sharpest attacks for Donald Trump. Sanders contended that some of the latest polls also indicate that he would be the strongest Democrat to run against Trump in the fall. 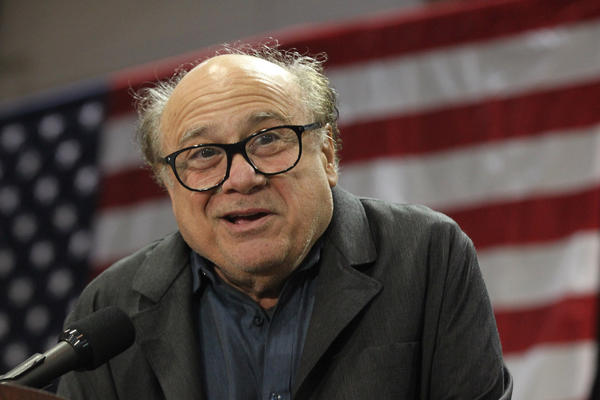 Like Clinton, Sanders also is bringing in high-profile surrogates to attract more attention to his cause. Actor Danny DeVito introduced Sanders at Sunday’s rally, and compared the senator to “Obi Wan,’’ a reference to the Star Wars character — also an elderly white man — who doled out wisdom to the younger characters.

Later, in a telephone interview, DeVito praised Sanders' "transparency and his honesty.'' DeVito added that he also believed that Sanders, if president, would keep the U.S. out of "senseless wars."

Booker said in an interview that there was a reason for all the surrogate help, for both candidates. What happens in Missouri on Tuesday, he said, is "profoundly important for a lot of dynamics going on in the larger race."

For Clinton, he explained, "Missouri is an important Midwestern state that she needs to show she can win ... She is trying to demonstrate that Michigan is not a trend. That what happens in Missouri is the norm."

But Clinton's 3-point lead over Vermont Sen. Bernie Sanders is within the margin of error.

Trump leads Texas Sen. Ted Cruz by 5 points, but pollster J. Ann Selzer noted that if evangelicals turn out in similar percentages to years past, Trump's lead shrinks to 1, though he still leads.

Bernie Sanders and Hillary Clinton had another tense debate Wednesday night in Miami, less than a week before crucial primary contests on March 15.

The latest face-off between the two came as the Vermont senator was riding high from an unexpected victory Tuesday in Michigan. The two clashed over immigration reform, U.S.-Cuba relations and Wall Street policy, and debated their electoral strategy going forward.

Next Tuesday, voters from Florida, Ohio, Missouri, North Carolina and Illinois will cast their ballots.

A Michigan GOP View Of The Presidential Contest

Michigan’s Republican National Committeewoman Ronna Romney McDaniel, Mitt Romney’s niece, talks with Here & Now’s Robin Young about Michigan’s role in the calendar, the tenor of the campaign debate and why she believes any Republican nominee would be better than a Democrat.