The president of Planned Parenthood says the effort in the Missouri legislature to bar abortion providers from receiving any funds from Medicaid is a waste of taxpayers’ money.

Under existing law, state and federal funds can only cover abortions in the case of rape, incest or when it’s necessary to save a woman’s life.

But the Missouri House sent the Senate a bill last week that would also block abortion providers from receiving Medicaid reimbursements for services like pap smears or testing for an STD.

While in St. Louis campaigning for Democratic presidential candidate Hillary Clinton over the weekend, Planned Parenthood President Cecile Richards said the measure would deny women on Medicaid the choice to go to Planned Parenthood for those services.

“We provide family planning services to tens of thousands of women here in Missouri and that’s what they’re trying to end,” Richards said. “It won’t hold up in court, and they’re wasting both taxpayers’ money and the voters’ time.”

When the measure passed the House on Thursday as part of a state budget package, state Rep. Marsha Haefner, R-Oakville, said language to block Planned Parenthood from all Medicaid funds was included because “the taxpayers in the state have made it very clear; they do not want their tax dollars going to support abortion services.” 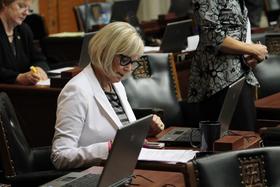 Newman said some of her fellow state legislators are conducting a “witch hunt” this legislative session against Planned Parenthood.

In addition to the House budget passed last week, Newman said she was concerned about an anti-abortion omnibus sponsored by state Rep. Diane Franklin that she expects to go before the floor this week.

“One of the more harmful elements actually would prevent anyone if it became law from actually even donating any fetal tissue,” Newman said. “We’ve had several physicians actually testify in committee in terms of real case stories that often women, particularly who have suffered several miscarriages and are trying hard to have a child, often want to have their tissue researched to find out any type of fetal anomalies, anything that they can do to actually help them produce a healthy pregnancy in the future.”

Newman said she was also concerned about so-called “trap law” measures that would put additional restrictions on abortion providers.

Missouri legislators expect to focus on abortion, and University of Missouri, in new session

Legislative leaders and anti-abortion activists are making it clear that abortion regulations – and Planned Parenthood -- are likely to be among the top issues for many Missouri lawmakers when they return to the state Capitol in a few weeks.

Meanwhile, area allies of Planned Parenthood say they’re fighting back – beginning with a rally planned for Saturday outside its midtown St. Louis clinic.

In Texas yesterday, a grand jury that was investigating possible misconduct by Planned Parenthood cleared the organization, and instead indicted two anti-abortion activists, David Daleiden and Sandra Merritt.

Meanwhile in Florida, lawmakers advanced legislation yesterday that would essentially make abortion illegal in the state.