SEMO, the 2021 OVC Regular-Season and Tournament Champions, received seven first-place votes and 145 total points for second in the predicted order of finish selected by the OVC's Head Coaches and Sports Information Directors.

The Redhawks finished the 2021 season with a 26-8 overall record (14-4 OVC) and concluded their season with an NCAA Tournament Appearance at #7 Kentucky.

Among the honorees, Beasley, a senior outside hitter, was among the league leaders last year in kills per set and points per set in route to First Team All-OVC accolades.

Beilsmith, a senior libero, earned Second Team All-OVC laurels last year as she broke her own school record for digs in a single-season.

The Redhawks will start their regular season next weekend when they host the SEMO Invitational, and four-team, two-day tournament that starts on Friday, August 26. 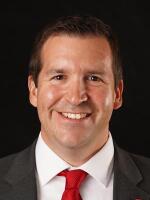